2,750 tons of ammonium nitrate had been stored at the Beirut port, in the heart of the city, for six years. At 6:08pm this caught fire, causing one of the largest ever non-nuclear explosions.

Entire areas of Beirut were destroyed, the explosion was felt more than 200 kilometers away and shocked the world.

A terrible individual and collective trauma.

There has been no recovery, no answers, no one held responsible, no justice. Only the passing of time.

Our greatest sympathy for everyone affected by this. 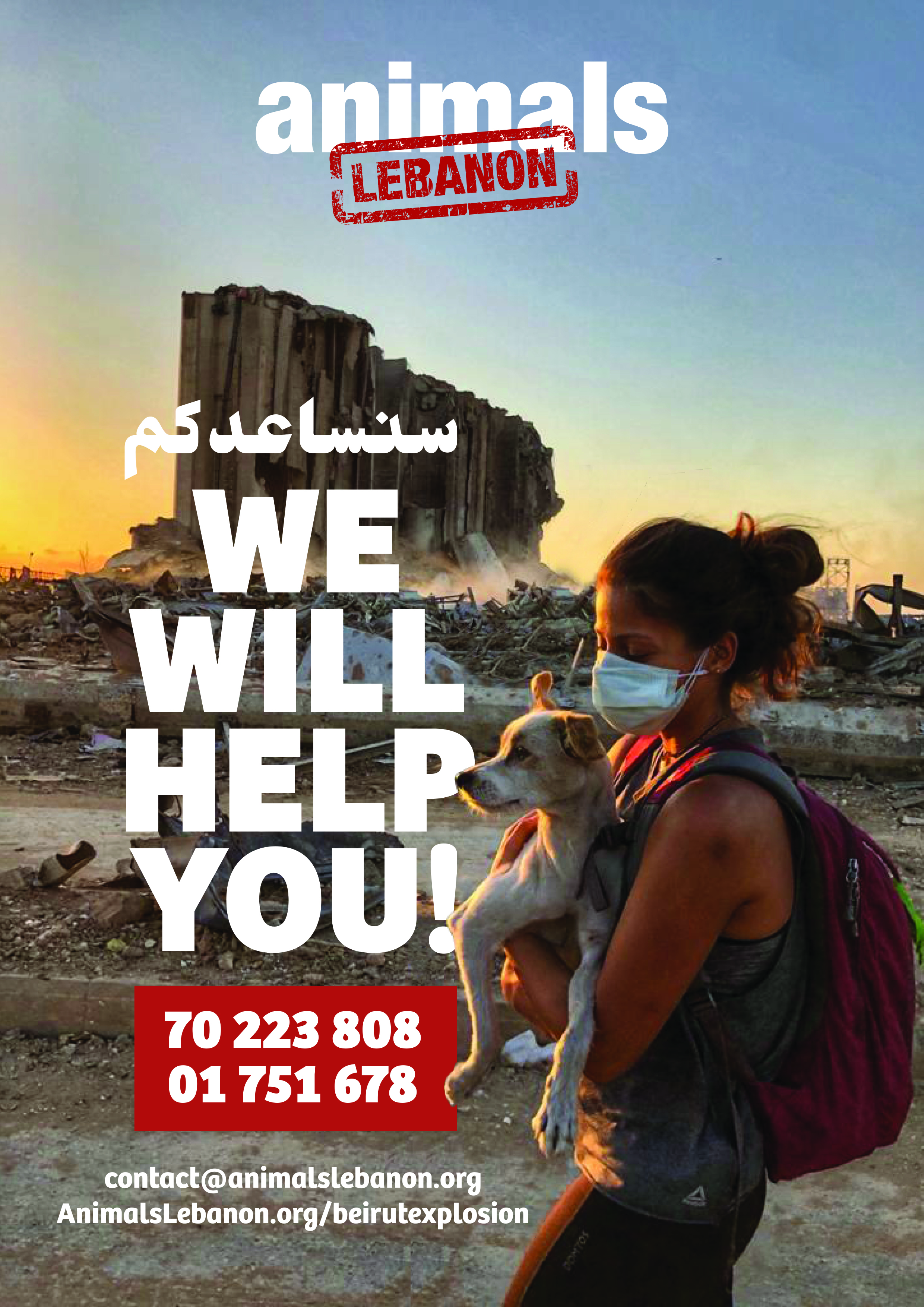 No one could understand or come up with imaginations of what happened. Most thought it only happened to their immediate area. Long minutes of frantic phone calls that would not go through. Then finally some bits of communications, some pictures and videos. Still no one knew what had really happened, the scale, or the sheer destruction. Only that there was an explosion at the port.

Everyone had to take care of themselves first, then a few of us made it to the office not knowing the damage or condition of the animals. When we entered the front door there was glass and blood covering every surface. CCTV footage shows large glass panels being blown out, animals running in fear, and as their feet were cut by the glass bloody footprints everywhere. The injured animals were rushed to the vet clinic, and two hours after the explosion we were on the ground.

Early morning we had a meeting point in the most affected area. By day two we had a specific stand, tent, table, and equipment. By day three we were able to develop this into a functioning staging area that allowed us to coordinate volunteers, meet people who lost pets, reunite pets with families, distribute goods, hold animals, and rush animals to vet clinics. It took nine days of scaling up operations before we were able to feel like we were managing.

Our efforts focused on finding lost pets, searching for injured animals, holding animals for people who were injured or lost their homes, and providing pet food and supplies to people in the affected area.

A WhatsApp group was started for volunteers, then the group limit reached, and finally more than 350 people volunteered during this time. People and animals were shuttled in and out of the area on motorcycles. Roads were full of rubble and impassible, and even once cleared protests, traffic jams, and roadblocks made motorcycles necessary.

All complicated by the chaos, coronavirus, violent protests, government resignation, and Beirut being put under military control.

We planned two months to finish our immediate response. Four months later it continued to be our focus, and we still had many rescued cats and dogs to be rehomed, and other animals we were holding for their guardians who had fled the country or were still to injured or not yet settled.

Our work in the four months following the explosion –

2 – hours after explosion that team deployed to help
870+ – requests for help we received from people
354 – people volunteered in the search and rescue and care
412 – animals given veterinary care
139 – animals taken to our shelter
68 – rescued animals that needed adoption
127 – lost animals reunited with their guardians
9,600 – kilograms of food distributed for affected animals
7,900+ – hours spent on the ground in affected area
16 – animals reported to us as lost but we were never able to find them

Lebanon one year later
Lebanon was on its way to collapse before the explosion and is still in a devastating freefall. Nationwide protests in October 2019 brought problems into the open, but those problems had been growing long before the protests.

One year after the explosion, there has been no real investigation. Few questions answered, no truth or accountability, no one held responsible, and no justice.

The World Bank says Lebanon's economic collapse is likely to rank among the world's worst financial crises since the mid-19th century. In early 2020 Lebanon defaulted on foreign debt. The currency has lost nearly 95% of value. Minimum wage has dropped to $1 per day. More than 70% of the population is now living in poverty. Hyperinflation makes many products unaffordable, and prices continue to rise as subsidies are lifted.

Barely two hours of electricity per day is provided. The lack of electricity leaves whole cities in the dark, hospitals are forced to make difficult choices, government institutions cannot function, restaurants and supermarkets throw away spoiled food. Overworked generators can only fill part of the gap, and the cost of fuel means generator services cost more than minimum wage. Many are left in darkness and there are warnings that government electricity may soon stop completely.

Fuel shortages are affecting everyone. Without hard currency importing enough fuel to supply the needs is no longer possible. Prices have tripled as subsidies are lifted. Fuel is rationed. Lines of hundreds of cars waiting at gas stations. Frustration has turned into violent fights over fuel.

Medications are hard to find and pharmacies continue to strike or close. Subsidies have been reduced or fully lifted making many lifesaving medications unaffordable to most. Entire networks have been set up for people to help find or trade for medications, and visitors to Lebanon bring suitcases full of medications for friends and family.

Coronavirus case are on the rise again. New restrictions are being put in place, but as hospitals struggle with the economic crisis, lack of medicine, and fuel, caring for new COVID cases will be a struggle.

Lebanon has disintegrated from a collapsing state, to a collapsed state, to real fear of a failed state. 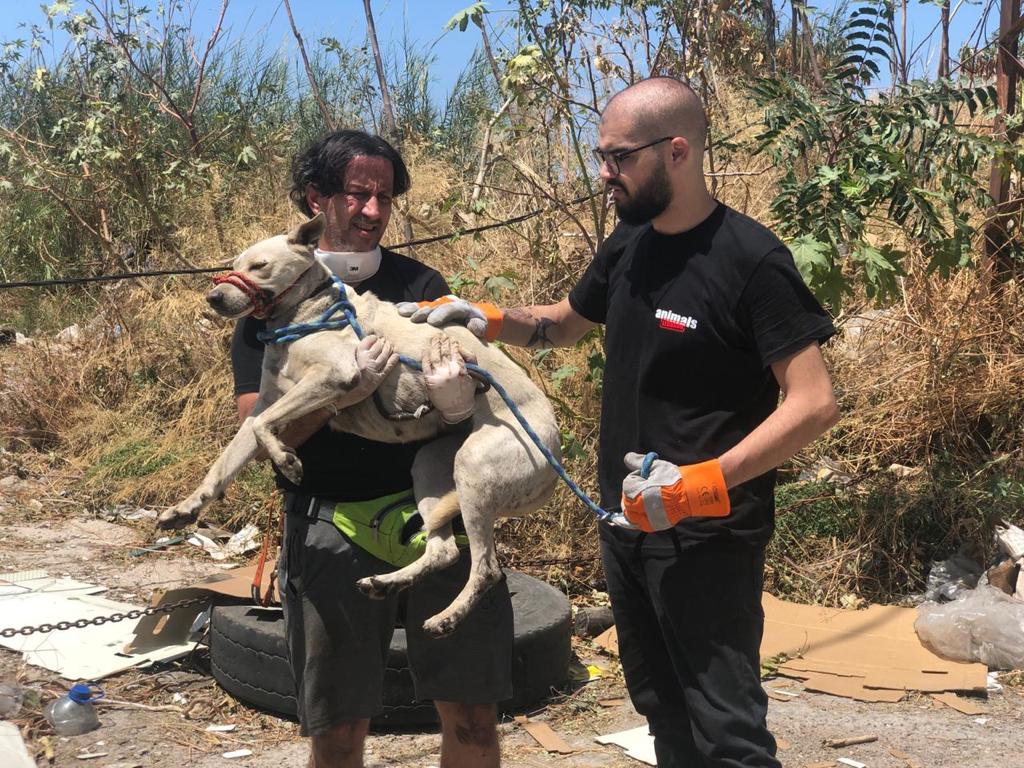 Animals Lebanon one year later
The last 12 months have been the most challenging since Animals Lebanon was started in 2008, and most of us agree that this has been the worse year on a personal basis.

Animals Lebanon was already scrambling to cope with the economic, political, and humanitarian crisis that started in late 2019. Then coronavirus, lockdowns, and travel restrictions further complicated the situation. Then the devastating explosion, upending our work for nearly six months, and making the situation increasingly unbearable.

Animals Lebanon must accept that we are operating in a different and unstable environment, with changing animal welfare needs, and adapt regardless of the frustration or desire to fight against it.

Early 2021 we started a strategic planning process to determine how we can best help animals in the coming years. Our mission remains the same – to inspire the nation to understand and care about all animals.  But our strategy, annual plans, and capabilities have changed.

We lost half of our annual budget overnight as long-time donors no longer able to access funds trapped in banks and currency sharply devalues. Some of our funding is trapped in the bank and inaccessible. We expect to have a budget shortfall for the next two years, and to break even in 2023. Fundraising has shifted to international efforts. Fiscal sponsors in the US and Europe have enabled us to raise funds and have them safely held and accessible.

We are working on setting up our own facility on a donated plot of land in the mountains outside of Beirut. This was always a goal for us as it will better enable many aspects of our operations and further improve the welfare of animals in our care. Being self-sufficient with our own water source and renewable energy is more important now with the breakdown of government services, and allows us to distance the organization from other problems.

Animal welfare education program is being moved online, taking advantage of the new tools and teaching methods students have used during lockdown to provide free education in Arabic to primary students. We have an agreement with the Ministry of Education to integrate this into the new national curriculum, but with government collapse projects are at a standstill.

Community support and needs have changed. People who used to donate or help rescue animals on their own now need help to buy food for their own animals. There is an increase of requests for people leaving the country and needing assistance to take their pet. Adoptions have dropped drastically. Much of our support has shifted to trying to keep families together and to prevent people from possibly abandoning their pets. We have distributed more than 12 tons of food, provided hundreds of free vaccines, increased spay and neuter for rescued pets, and offer subsidized veterinary care, and will continue to grow these areas of help.

Zoos and the animals they keep have always been in extremely poor conditions. With the economic crisis these endangered animals are at greater risk for malnutrition, poor care, and starvation. We want to prevent what has happened in other situations of conflict or economic crisis and send many of these animals to sanctuaries before it is too late.

Sadly, we are also planning for a worst-case scenario. How can Animals Lebanon best help animals if Lebanon collapses fully? If insecurity increased, if there is conflict, if basic living conditions become impossible, if we cannot find food or fuel or medication, if banking restrictions cut Lebanon off? We are working to better develop the organizations remote capabilities, to be more flexible, take advantage of communication tools, use our reach and standing with the community, all so we can continue to make a major difference for animals in Lebanon even if everything else works against us. 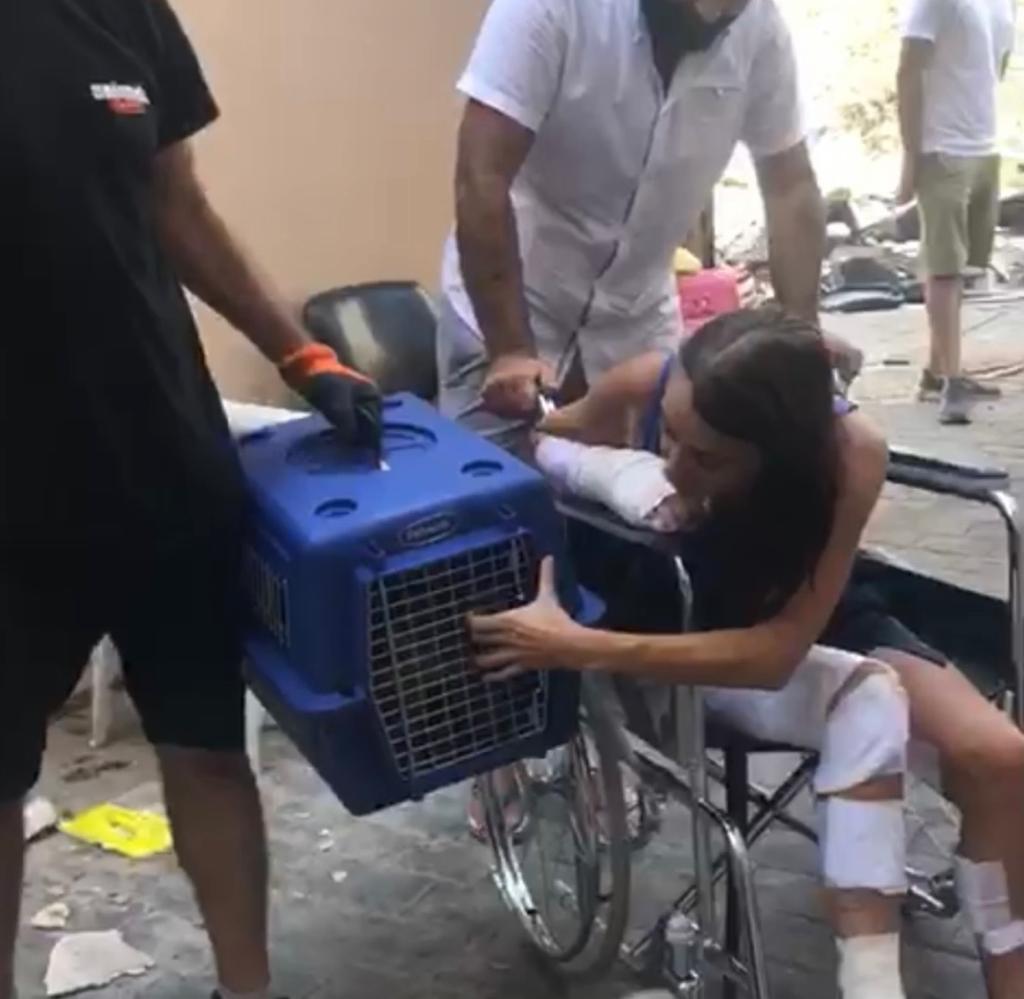 Thank you
None of this would have been possible without the support of so many in Lebanon and internationally.

The explosion happened to us, damaging our office, injuring animals in our care, injuring some of our members and volunteers, destroying their homes and businesses and jobs, upending our lives, and without your support we would have been completely overwhelmed.

More than 350 volunteers joined in the efforts from the first night, with us for the next difficult weeks, and many have stayed on to continue to help animals. They gave selflessly and often at risk of harm to rescue animals.

Our members and supporters in Lebanon, who while directly affected by the explosion, did their best to provide as much help as possible.

Everyone around the world who generously donated, checked in to make sure we are OK, or just gave a good word to keep us going.

Thank you to everyone we were able to help, and thank you for trusting your pets with us. Your happiness, joy, relief, and appreciation was an enormous motivator for all of us.

Our most sincere thank you and appreciation to everyone who made our work following the explosion possible, and for keeping Animals Lebanon going during this incredibly challenging time.

We are facing extremely difficult years to come and hope for better times for people, animals, and Lebanon.