The trigger was pulled, the mom was dead and her two babies were orphaned.

Striped hyenas occur naturally in Lebanon and they are under threat. Habitat loss is making it difficult for many species, and the deliberate hunting, poisoning and capture of hyenas makes survival even harder.

We dont know what happened next, but a person had the two babies and was searching for a buyer. If the hyenas were sold they would end up suffering in backyard cages or private collections. Luckily the wrong person was asked to buy them - a woman called us late at night explaining what happened and asked for our help to save them before they died or were sold.

Driving more than two hours to the southern border we found the babies in a box. It took a lot of difficult and tense negotiation to convince the guy but finally he turned the two babies over to us.

Getting back to Beirut we finally understood what we were faced with, and how important the next few days and weeks would be for these two hyenas.

They were brother and sister, only about ten days old, and their eyes had just started to open up. They had not eaten in more than 24 hours and weighed only 800 grams.

The first couple days were a struggle. Trying to get them to drink the specialized milk from a bottle was not easy, and it needed to be done every few hours day and night. They seemed to be improving at one moment and getting worse the next moment.

After the first week they started to get stronger and want to eat, and we could finally start to relax believing they would make it.

They grew bigger, more confident, more playful. Now named Max and Val, this brother and sister pair had pulled though.

Max and Val need your help now to get to the next stage of their life.

They can never be released as the threats are too great, especially as thet did not learn the necessary survival skills at a young age. They could end up locked in some terrible cage, or worse, be killed like their mother.

Max and Val need to get to a sanctuary where they can live in a natural environment.

Donate now and help these two young hyenas have a new live free from danger.

Brother and sister Max and Val are showing new behaviors every day so check back and see their amazing transformation. 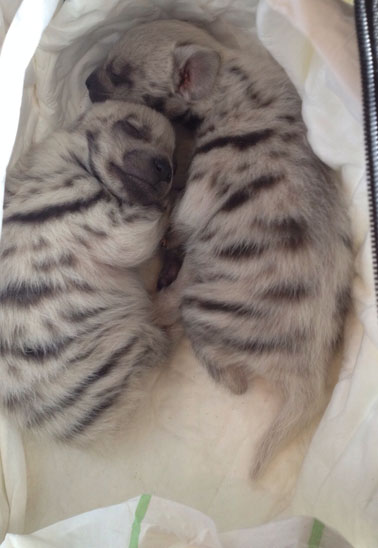 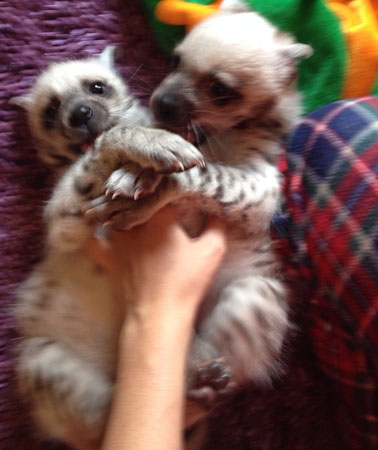