Barry brought back to life

We received an email from Dina, a concerned member of the public who had spotted a badly injured kitten hiding underneath a car on Pasteur street.

Dina had nothing to carry the kitten with, did not know where to take him and was in a rush to get to work on time.

Within half an hour an Animals Lebanon volunteer was rushing to the scene. But since Pasteur Street is quite long we needed the help of modern technology to rescue the little cat.

Dina used her phone to send a map of the exact location of where the kitten was hiding and we were able to get to him just in time.

It wasn't certain if his injuries were the result of being hit by a car or falling off a balcony, but it was clear that Barry, as he has now been named, was in bad shape.

He was bleeding from his nose, eyes and mouth, barely conscious and clearly in a lot of pain.

We took Barry to the vet where he was given all the necessary medication and some strong pain killers.

A volunteer stayed with him constantly just to let him know that despite his uncomfortable situation there are people who care for him.

Barry was diagnosed with diaphragmatic hernia, a serious condition that needs a very sophisticated operation. It was even more risky as he was so young, but the operation had to be done.

The little kitten made it through the operation and he is now recovering. 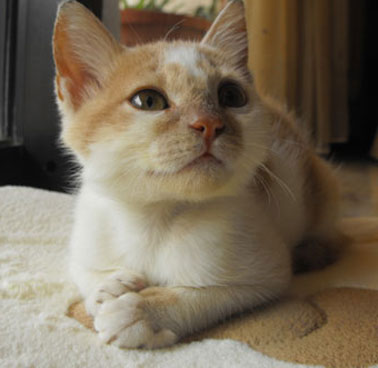