Baxter and Chippers rescued in time In addition to gaining support for animal rights and fostering awareness, rescuing hurt or helpless animals is a large part of Animals Lebanon?s work. Most recently, two dogs in the same vicinity were rescued by a team of Animal Lebanon members. While the organization?s team rescues many animals on a regular basis, this rescue of Baxter and Chippers was especially memorable.

Chained to one spot, with no shelter from sun and rain, Chippers was an obvious and easy target for a group of young boys. He was already in poor shape because of the lack of shelter which caused badly infected skin and a severe ear infection, but things became worse when the boys let their dog attack him. Fortunately, his rescuer heard Chippers? whimpers of pain and confronted the boys and was able to literally rescue Chippers from the other dog?s jaws; Chippers was treated for a dog bite wound on his leg. Given Chippers? experience with humans, he?s still cautious around people but is not showing any signs of aggression. Although he accepts everyone around him, he will need time to recuperate and gain back trust toward humans.

Similarly, Baxter was found confined to one spot. No one was expecting to see him there. On the same rescue mission to help Chippers, an Animals Lebanon member needed some tarp materials to aid her. She went to pick it up from a caged enclosure and then found Baxter crouched in the small cage under metal tin and the tarp. This brave dog was left without food or water and did not have anything under it to drain the rain water seeping up under him. As expected, it took the rescuers much time to reach him as he was scared and needed to gain their trust. In fact, with every step of the rescuers?, Baxter would hide under the metal. However, after nearly two hours of interaction between the rescuers and Baxter--which included the rescuers giving him space and then him yelping out to them--the dog was ready to be rescued.

He was removed from the area and taken into the organization's care. Because Baxter is scared of people and often flinches when someone pets him, we believe he was abused. For now, he prefers hiding in places and avoids being seen, but with time he is slowly opening up and soon will become a playful and energetic dog.

Chippers was adopted one month after his rescue in a good home in the US. To adopt Baxter, send an email to adopt@animalslebanon.org. 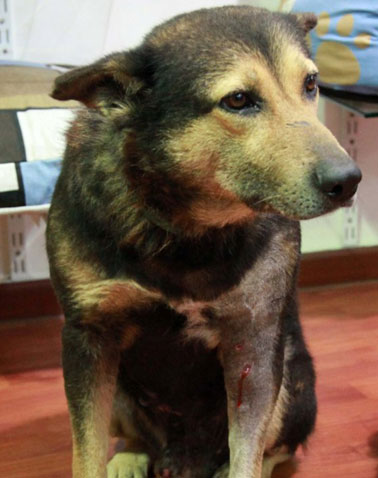