A 135 centimer long Nile crocodile that made headlines over the summer after it was spotted in the Beirut River was flown today to a sanctuary in the UK.

After he was first reported in the media, Animals Lebanon worked with the Ministry of Agriculture to ensure the crocodile would be safely captured and sent to an appropriate facility. The endangered animal had lived in the polluted drainage river for more than a year. The cemented drainage river carries industrial waste, and the highly contaminated water soon destroyed nets placed in attempts to secure the crocodile. The skin and legs of chickens floated in the water, as well as the waste from the nearby fish processing factory. Rescue workers and volunteers quickly became exhausted or sick after spending hours under the sun and being exposed to the pollution for weeks at a time over the summer.

Despite repeated attempts to capture him, the crocodile was finally caught in early April by a local fisherman using a net.

The young crocodile was smuggled into Lebanon for the exotic pet trade, and most likely dumped in the river after it grew too large to be handled.

He was flown out from Beirut aboard a Middle East Airlines flight early Friday morning to London. MEA, a long time partner of Animals Lebanon, sponsored the flight and transported the crocodile for free.

Sukleen generously sponsored all other costs for the rescue and transfer of the crocodile, including the necessary medical checks, veterinary procedures and transport crate. Crocodiles of the World, an educational sanctuary in the UK which cares for hundreds of reptiles, will now provide lifetime care. Lebanon has recently become a party to the Convention on International Trade in Endangered Species but endangered species continue to be smuggled in. Nile crocodiles, which should be protected under this convention, can still be found in pet shops for less than $100.

While this crocodile is now safe, more efforts must be made to prevent endangered animals from being smuggled into the country only to be kept in miserable conditions or abandoned once the owners realize these are not pets. 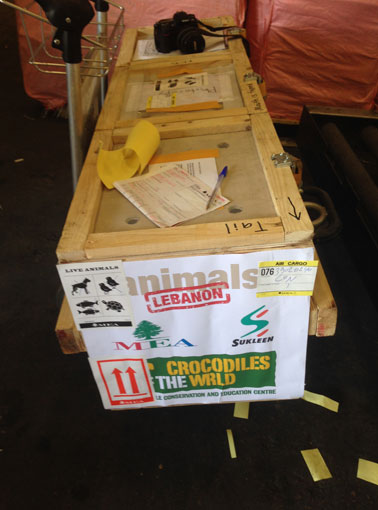