Huge animal is released back into the wild

Easy, tiger! Incredible moment huge animal is released back into the wild after being rescued from a poacher's snare

This is the incredible moment an angry and fearsome tiger makes a bid for freedom - after being rescued from a poacher's snare.

The hulking beast, named Victor, was nursed back to health by experts for a week after being caught in a brutal snare set by ruthless hunters.

The nine-year-old Amur tiger, who was spotted by students in a remote Russian forest who heard him roaring in pain after being trapped in a cable snare.

The bleeding beast, who would have been worth up to $10,000 on the black market for its bones and skin alone, was finally released to safety in the frozen wastes of eastern Russia after being treated for cuts to his skin.

One of them John Goodrich, 45, who has spent 16 years working with the tigers in Russia, said: 'We chose a place with enough open space so that we could sit in our vehicles and watch as Victor left his cage to freedom.

'We had cameras ready as my colleague raised the door to the cage.

'Victor glared at us and roared, making a great cloud of steam in the cold air. But he stayed put.

'Then, letting out another roar, he turned toward us again and burst out of the cage. He hit the snow and, with one great leap, disappeared into the forest.

'The power and speed with which he leapt from the truck and disappeared into the forest was awesome and would have been terrifying had I not been sitting in the safety of my vehicle.'

When Victor was found, the kindhearted students drove 50 miles to the nearest telephone to raise the alarm, and alerted the Inspection Tiger Department to their find.

The organisation then contacted the Wildlife Conservation Society, which sent a specialist to anaesthetise the stricken tiger and transport it to safety.

He was examined by experts, who found him to be 'unusually fat and healthy', weighing 385 pounds, and stretching an incredible 10 feet long.

They kept him under observation for days, ensuring there were no internal injuries, before fitting him with a radio collar and driving him eight hours back into the wilderness.

John said: 'Watching him burst from his steel cage to freedom was incredibly satisfying; there was no doubt in our minds that we had made a difference.

'His beauty and power as he leaped from the cage into the forest was stunning and something I will never forget.

'This story is immensely encouraging.

'For the one or two poachers who set the snare to catch a tiger, there were several dedicated people willing, ready, and able to get the tiger out of the snare, against all odds.' 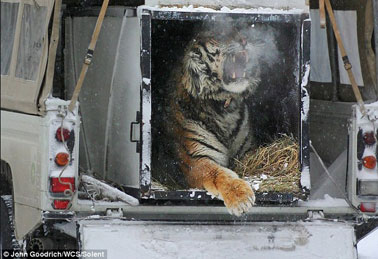 Roaring to go: Victor lets out a growl as he is finally released back into the wild 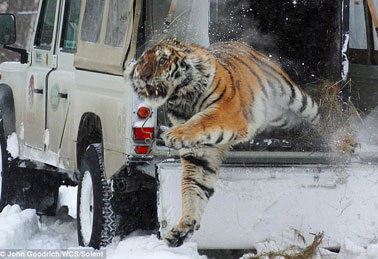 Freedom: The Amur tiger bursts from his cage and leaps through the snow