Rescued hyenas make it to sanctuary Many rescues take longer than we could ever expect - a new problem or setback, an uncooperative owner, lack of sanctuaries or even funding.

We did not give up on Rita and Sara, and after more than a year of determination they are both on their way to a sanctuary in France.

The striped hyena is listed as near threatened throughout its range from northern Africa across the Middle East and to India, and in Lebanon hunting and habitat loss have resulted in a population decrease.

There are regular media reports of hunters bragging about the hyenas they senselessly shoot. Crude taxidermy shops take the dead bodies and sell the skins or gruesomely made stuffed hyenas.

Every couple of months we are notified about hyenas in zoos or pet shops. Occasionally we also come across hyenas that have been so badly injured that even with the best of care there is no chance of survival.

It is no doubt that Rita's and Sara's mothers suffered the same fate of being poisoned or shot as their habitat is taken over. Rita and Sara survived but there are countless other young hyenas that are killed along with their mothers.

Rita lived her entire life in a zoo, she had never been vaccinated or seen by a vet, and she lived alone in a small room. She was more than five years old when we first saw her, and the zoo owner said she was moved to the zoo when only some weeks old.

Sara was captured when young and kept in a cage behind a villa. Her cage measured 60 cm long, 60 cm wide, and just one meter long. The only reason she was there was so people would have something to look at when there were parties at the villa. Her brother was kept in the cage beneath her but had died before we knew of Sara, and the only things left were some bones and rotting skin. Read the full story of Sara here.

As hyenas occur naturally in Lebanon we needed the approval of the Ministry of Environment before any other step. Ideally these hyenas could be returned to the wild but in this case it was not possible. Both had grown up around people and were fed by people.

They had not learned the skills to survive and would likely come to villages looking for food. Even if this could be overcome, with the ongoing hunting and poisoning there are very few safe areas for hyenas.

The Minister of Environment, His Excellency Nazem El-Khoury, called a meeting of experts that would determine whether the hyenas were sent to a sanctuary or returned to the wild. After discussing for more than an hour the hyenas had what they needed - "These animals are being moved for the benefit of the welfare of the two hyenas and the value to conservation," Minister El-Khoury wrote when giving final approval for the transfer at the end of the meeting.

There are no sanctuaries specifically for hyenas, but the the Tonga Terre d'Accueil sanctuary in Saint Martin la Plaine, France, agreed to give them a permanent place. Veterinary work had started long before, so the hyenas had received vaccinations and a general check up. Dr. Jean-Christophe Gerard came to do final blood tests, treat them for possible parasites, and make sure they were ready for travel.

Specially designed crates were made to meet the strict requirements of the airlines. Hyenas have extremely powerful jaws and the large crates must be lined with strong metal. Rita and Sara each weight only about 35 kilograms but the crate weighed over 200 kilograms.

MEA, a corporate partner of Animals Lebanon, agreed to completely sponsor the flight for both hyenas saving much needed funding that would have otherwise been spent on the cargo costs for the heavy crates.

Wednesday morning both crates were loaded onto a truck in Beirut and we began the long trip to the zoo with Dr. Gerard. We have been through the process of darting them before but it is always a stressful process for the people and animals.

Rita was the most calm and was darted first. It took about 10 minutes before the drugs took effect and she was asleep enough for us to safely enter her cage and move her. She was given a quick check and then moved onto a stretcher and placed into the waiting crate.

It was now Sara's turn and though she is slightly smaller than Rita she is move nervous and it took longer for the drugs to work. Quickly onto the stretcher, then into the crate full of shredded paper to make the journey more comfortable.

They were each given a final injection to reverse the effects of the other drugs and they soon woke up and had a different view for the first time in years. Both Rita and Sara were quiet, no biting or pacing, and though it was easy to see they were nervous luckily they remained calm.

Both crates were loaded back onto the truck and we began the slow drive to the airport back in Beirut. It was a great feeling to finally be away from the zoo and know that the hyenas are on their way to something far better.

It was close to midnight when we got to the airport and we had just enough time to finish everything before the customs closed for the night. 600 Kilograms was the final weight, and the final hours before the early morning flight passed quickly. This part of the airport is busy and noisy during the day but there were very few people and it was satisfying to spend some final time with Rita and Sara before they left.

The flight to Brussels finally took off and the hyenas were gone. These were not killers, they did not have magical powers as so many people believe. Rita and Sara were both as curious and interesting as any other animal, they had foods and treats that they preferred more than others, they each had their own special characters and behaviors, and we should see them as two examples of why we need to better protect the remaining population of hyenas in Lebanon.

Your support made this possible, and we urge you to continue to donation so generously for the many animals like Rita and Sara that desperately need help.

Once they land they will be driven into France to the sanctuary near Lyon and moved to a natural enclosure. The process to integrate them into one group will begin soon after arrival and we hope Rita and Sara will quickly become friends and enjoy their new life at the sanctuary.

Thank you to
- MEA for sponsoring this flight and others,
- the Tonga Terre d'Accueil sanctuary for giving the hyenas a permanent home,
- Dr. Jean-Christophe Gerard for helping with all of the medical procedures,
- the GRAAL Foundation in France for helping find the sanctuary and arranging logistics in Europe,
- Fondation 30 Millions d'Amis,
- Société Nationale de Défense des Animaux,
- the Ministry of Environment and Ministry of Agriculture for giving all of the necessary approvals, and to
- Auto Khaled and Cavalier hotel for making this rescue as easy as possible. 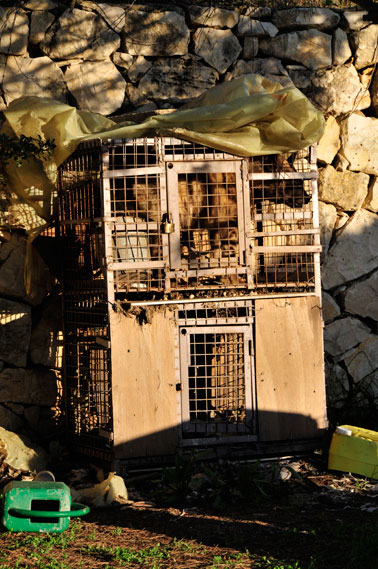 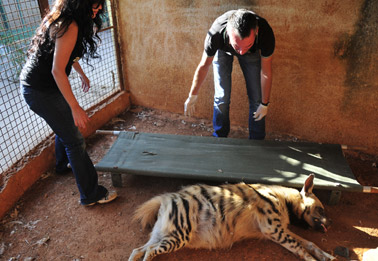 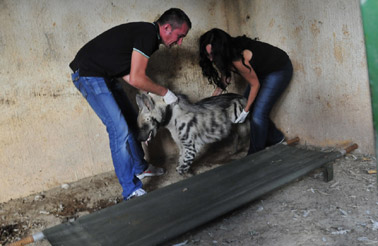 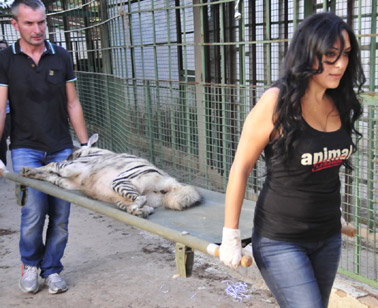 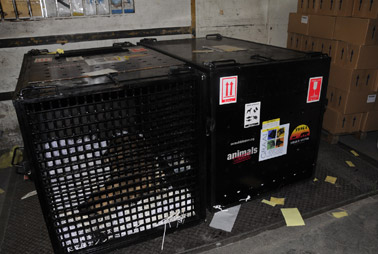 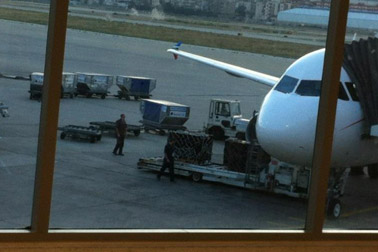 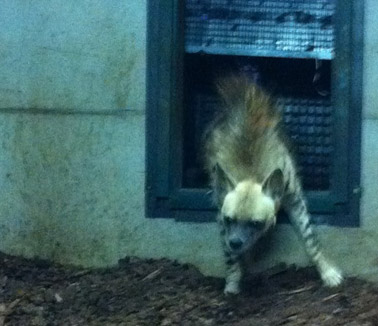