Kiki the chimpanzee has an answer for everything. She hoots with joy when playing with friends, shrieks for attention when bored and grunts when hungry.

At first glance, there?s little out of the ordinary about this chimp and her incessant chatter. But it?s a sound Dr Alison Cronin, director of Monkey World Ape Rescue Centre in Dorset, never tires of hearing.

Because, for eight years, Kiki was imprisoned alone in a sealed box in Beirut ? an unwanted pet who had lost the power of speech. ?Kiki was born in the wild and, while she was a baby, her mother was shot and Kiki was torn from her arms,? says Alison, 44.

?She was smuggled to Beirut and was two years old when she was bought by a wealthy family as a pet for their children. But, by the age of four, this wide-eyed baby was big and boisterous.

One day, after a play session, Kiki was put into her box ? and never let out again. Her cage was placed in the garden by a busy road and, as eight years passed, the door to the cage fused shut. Meanwhile, with no company, Kiki fell silent.

Alison heard of Kiki?s suffering two years ago and in January this year, after pleading with the owners, flew to Beirut with a team from Monkey World to bring Kiki back. ?We found her cage had fused shut and had to sedate her so she didn?t panic while it was cut open. Incredibly, Kiki seemed to sense her life was about to change. Far from being scared by the noisy airport, she sat patiently looking out of her crate. Seven hours later, when we landed, I raced straight to the quarantine area and found Kiki looking calm and alert.?

Once Monkey World?s latest recruit had settled in, the long process of introducing her to the existing chimps began. Alison steeled herself for problems. Not only can adult chimps fight to the death, but it is often a year or more before new faces are accepted by an established group.

We chose to introduce Kiki to a gentle chimp named Patricia,? says Alison. ?It was a terrifying moment because the two chimps might have flown at each other. But, instead of fighting, Kiki ran straight into Patricia?s arms and the two stood intertwined. It was as if Patricia was comforting Kiki for all those lonely years ? and as if Kiki never wanted to let go. I don?t cry easily and didn?t weep when I first saw Kiki in those desperate conditions. But I wept then.?

Even better was to come. After a short time, Kiki ? who had forgotten how to speak after years of solitary confinement ? began to call to the other chimps. And once her voice returned, she wouldn?t keep quiet. Alison says, ?It was easy to see why the other chimps liked her so much. She is blessed with an extraordinary joie de vivre.?

Kiki?s rescue and rehabilitation is one of the most incredible stories to emerge in the latest series of Monkey Life, which follows Alison and her team on their mission to rescue primates from around the world. While Kiki was getting used to her extended family, another new face arrived at Monkey World ? Oshine, an obese orang-utan.

For 13 years, Oshine lived with doting human ?parents? in South Africa, where she developed a liking for marshmallows and mints. Treated like a human, Oshine was used to opening the kitchen fridge and helping herself. But as her owners grew older, and with Oshine mothering any baby animal she met, they realised she should have the chance to live among other orang-utans.

Oshine?s owners had seen an episode of Monkey Life and contacted Alison for help. When Oshine arrived, the priority was helping her to lose weight. ?Bored and lonely, she had turned to food to the point where she was so fat she was in danger of heart failure,? Alison says.

Once we put her on a diet, we had to think about introducing her to another orang-utan. We chose a female, Armein, who was docile and quiet.?

The first attempts to introduce the two met, in Alison?s words, with ?handbags at dawn?. Armein chased the terrified Oshine, who had to be removed for her safety. Alison says. ?Oshine didn?t know how to react. She had been raised among humans. Then we took in an orphan orang-utan ? one-year-old Silvestre, who had been abandoned by his mother at a Spanish Zoo.

Keepers there hand-reared him, but he needed a foster mum.?

In stepped lonely, fat and insecure Oshine ? and it was love at first sight. Alison says, ?The minute Oshine met Silvestre, something seemed to click between them. He ran into her arms and she scooped him up as tenderly and lovingly as any mother. She groomed him and watched his every move. In return, he snuggled into her overweight body and gazed up at her face in pure adoration.?

Mother and son have been inseparable since. Alison says, ?Oshine?s owners always felt she would be a natural mother, and seeing her with little Silverstre, it looks like they were right. When Silvestre is around six, Oshine will probably have lost enough weight to safely get pregnant. Until then, two orang-utans who were desperately alone are enjoying the greatest bond of all.? 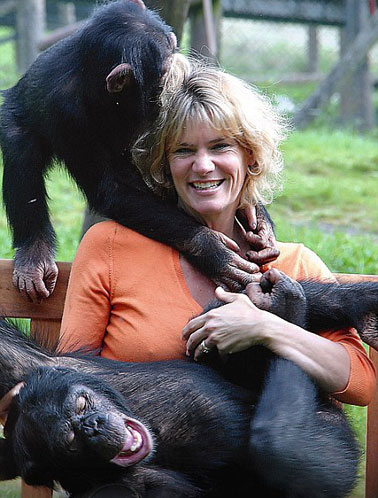 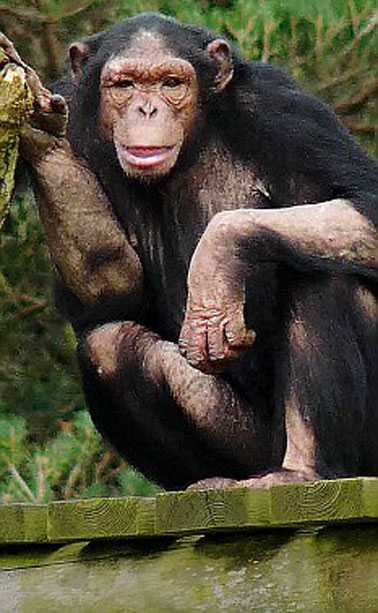