Just one month ago we told you about a five week old lion cub found living on a balcony in Beirut.

The young lion, now named Leo, was being kept as a pet in downtown Beirut when we were first notified.

He weighed just six kilograms at that time and was taken from his mother much too soon.

The people keeping Leo were very cooperative and agreed to allow us to send him to a sanctuary.

There is currently no facility in Lebanon that can provide for these kinds of animals so we needed to find a sanctuary in Africa that could provide Leo with as natural an environment as possible.

The Drakenstein Lion park in South Africa is a sanctuary that cares for over 30 rescued lions, and they agreed to give Leo a permanent home. There was even another young female lion being rescued from a circus who would arrive to the sanctuary soon, and her and Leo could likely be integrated to start a new group.

"Leo was part of a shipment of six lions smuggled from Syria," said Lana El-Khalil, President of Animals Lebanon. "We have only been able to locate two of the other lions, the fate of the remaining three lions is unknown.

People wrongly think that these animals can become house pets, but within the first months of life they become too large and end up sold to private collections or locked in a backyard cage.?

It took four weeks to receive all of the necessary permits and documents. Leo also needed to be checked by a vet and receive some treatments to make sure he is healthy enough to fly and doesn't pose any risk to the other lions at the sanctuary.

A special transport crate also needed to be constructed to comply with the airline regulations and make sure Leo's trip is as comfortable as possible.

?Lion cubs are being sold to private collectors for $350, and the financial penalties to smugglers are zero, but the rescue and care of Leo costs thousands of dollars," said Lana. Luckily Animals Lebanon was contacted by DHL Express which helped sponsors Leo's trip to South Africa, as well as Emirates SkyCargo.

Leo was nervous when first placed in the transport crate, but quickly calmed down as we waited at the airport and finished all of the procedures. After an evening flight from Beirut to Dubai and a quick layover, he arrived to Cape Town at 11:00 the next morning and was soon at the sanctuary.

"It was fantastic watching him being loaded onto the plane, then the next morning seeing pictures of Leo taking his first steps on the grass in his new enclosure," continued Lana. "We have rescued many different species of animals but this was the first lion."

Leo is now at the sanctuary just outside of Cape Town and he has never been more happy. For the first time he is rolling around on the grass, enjoying the sunlight, and wanting to play at all hours. He has a long way to go but with the expert care of the sanctuary and the other lions showing Leo what it means to be a lion, in a couple years he will grow into an impressive adult.

It is not too late for any of these lions. They have their entire life ahead of them but to rescue the remaining lions we need your help.

Click here to donate now and check back soon as we bring you updates of Leo's progress at the sanctuary. 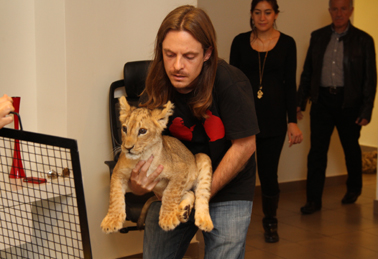 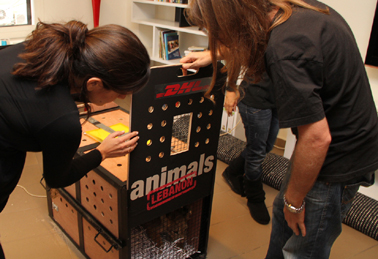 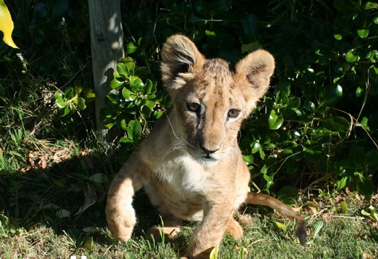 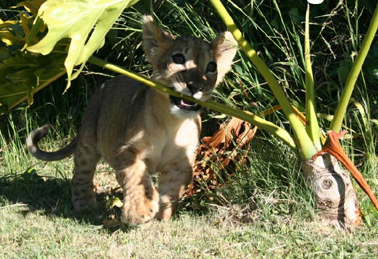