ZOO ANIMAL NEWS) LIBYA ? The Tripoli Zoo was abandoned during fighting in Libya?s capital last week. Left to fend for themselves during the chaos, the zoo animals weren?t given food or water for seven days. Although the fighting has ended, the animals are still in crisis. With low resources and few workers, the animals aren?t getting enough food. What?s worse: there is almost no fresh water, and in the sweltering summer heat of Northern Africa, fresh water is a necessity for survival. Read on for more information and a video detailing the plight of these zoo animals. Through Global Animal Foundation, the nonprofit charity arm of Global Animal, we are currently searching for organizations on the ground and effective ways to take action. Please keep checking back to see what you can do to help these animals in need. ?

The residents of zoos are often the first to be neglected when cities are hit by man-made or natural disasters.

CNN Senior International Correspondent Nic Robertson discovered a dire situation Tuesday at the Tripoli Zoo, struggling to function as a nationwide conflict rages around it.

Robertson found the gates locked and was told the zoo was under renovation ? that there were no animals there.

But a big cat?s roar told a different story, and Robertson followed the sound ? underscored by the echo of gunfire in the distance ? to find enclosures holding a tiger, lions, giant tortoises, hippos, hyenas, bears, monkeys, deer, emus and more.

All the animals appeared undernourished and struggling as they waited for food and for water where there was little or none to be found.

A tiger, loose skin hanging on its frame, prowled its enclosure when it sensed visitors.

?Just looking at him, you can see how thin he is in the way he is walking ? those back thighs, they?re so skinny,? Robertson said of the big cat.

?There?s no one here to tell us how often they?re being fed or how much they?re getting fed,? Robertson said as he walked the deserted grounds. ?We don?t even know if there?s a vet here to take care of them.?

During the CNN visit, the zookeeper arrived and explained that for seven days amid the turmoil of conflict in Tripoli, the animals got nothing. Now 10 of the 200-person staff have returned and are trying to feed all the animals.

The big cats get only half of what they need. And all the animals languish with one essential in very short supply.

?Water is these animals? most pressing need,? Robertson said. ?And it seems without help in these sweltering temperatures, all the animals here will continue to suffer.? 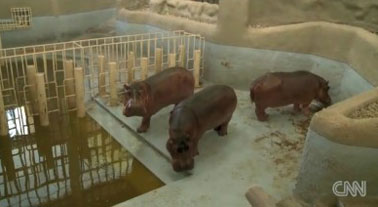