Do you know where your meat came from? Animals Lebanon encourages everyone to understand how their daily choices can impact animal welfare.

Farm animals suffer greatly, understanding where meat actually comes from and decreasing the amount of meat consumed can help reduce this suffering.

KOURA, Lebanon: ?Poor creatures,? is your first thought, as an overcrowded cattle truck trundles past you on the highway on its way either from the port or to the slaughterhouse. ?Ugh, they stink,? is likely your second.

But the connection between these animals ? imported from abroad as youngsters, most likely to be stuffed full of hormones and antibiotics, butchered and sold ? and the packaged beef products tastefully displayed at the supermarket is not often made by meat-loving consumers.

However, Jacques Mfarej, owner of Lebanon?s first certified organic beef farm, claims that aside from the questionable health impacts of eating meat contaminated with a host of added hormones and unnatural chemicals, the life, and indeed death, of the beast is reflected in the taste of its flesh.

Mfarej returned to Lebanon in June 2010 after living in France for ?long enough to appreciate the quality [of the meat].? But, arriving back in the country, he says: ?I was shocked to see the bad quality [of meat in Lebanon].?

For the most part, he says, the beef on the Lebanese market is produced from imported cattle that are fed questionable growth hormones so that they grow at an abnormally fast rate, rapidly reaching slaughter-weight and giving beef farmers the quickest return possible on their investment.

In addition to this, Mfarej says the quality of local meat is affected by the fact that there is no training school for butchers ? instead they inherit their skills from their predecessors ? cold rooms are not a common feature of butchers? shops; and carcasses tend to be divided and sold immediately after slaughter rather than being left to lie, as they are in Europe.

Eager to at least provision himself with decent, healthy beef, Mfarej, who says he is ?by nature close to everything bio and organic,? decided to take advantage of his family farm in Bishmezeen, Koura, where his brother George was already growing an organic kitchen garden.

Organic produce is free from antibiotics and synthetic pesticides, fertilizers and hormones.

Mfarej started out with just two calves, but it didn?t take long for one of his workers to point out that the cost of raising two calves and 10 calves is more or less the same; thus the enterprise expanded.

Now Mfarej has teamed up with Al-Marej Organic Farms and Food Store, has acquired organic certification for his beef and keeps approximately 20 cattle at any given time.

While some of his stock is purchased in Lebanon, most is imported from France aged 3-4 months, and raised by Mfarej for a year or more before it reaches the ideal weight for slaughter.

As Lebanon?s climate offers only four to five months of grazing annually, over 100,000 square meters of land is dedicated to producing organic foodstuffs to feed the herd. A diet of vetch, triticale ? a cross between wheat and rye ? corn and peas provides the animals with adequate natural nutrients to grow steadily to a size suitable for slaughter ? usually between 500 kg and 600 kg.

But if the animals don?t grow quickly enough, that?s OK. ?Nobody is in a hurry,? Mfarej says.

Patience is definitely one prerequisite for the organic meat farmer; others are diligence and attention to detail.

Istituto Mediterraneo di Certificazone, the organic certifying body, requires that the farmer keep detailed paperwork for each head of cattle.

Information such as the animal?s weight, what it?s fed, if it?s been ill, if it?s received treatment and so on must be regularly recorded. In addition, a vet must be present to check the animals when they arrive in the country and also each time an animal is butchered. Furthermore, the building and environment in which the livestock are kept, and the slaughterhouse in which they are killed, must meet certain standards and pass inspections. And, of course, the land used to feed the cattle must be certified organic.

Perhaps it is only a farmer who pays such close attention to the well-being of his livestock that can form a genuine affection for the animals he raises.

?Thank God they are in good health,? Mfarej says. And while he has not assigned any of the cattle names, he insists ?they are friendly.?

Indeed, The Daily Star can attest to this: A plump paddock of beasts interrupted their contented mastication of sweet-smelling roughage to sniff at visitors Saturday in the docile but curious fashion typical of their species.

Although confined to a reasonably spacious paddock during The Daily Star?s visit, the herd usually has access to an ample and lush pasture surrounding the enclosure.

However, through-traffic due to a closed alternative route to a nearby construction site meant the animals could not be allowed out Saturday. Truthfully, they didn?t seem overly perturbed, and in all likelihood the shade within the paddock provided them welcome respite from the afternoon sun.

Something meat-eaters don?t much like to contemplate, especially after having seen their dinner alive and well, is the actual slaughter of animals.

However, the way the meat is killed is important as it affects the quality of the final product, Mfarej says, explaining that in order to provide tender cuts of meat, the animal must be relaxed at the time of its death ? fear, and the tension it causes in the beast?s muscles, results in tough steak.

At the Mfarej Farm, cattle are killed in a two-step process.

First a captive bolt pistol is used to paralyze the animal.

This involves penetrating the brain just between the animal?s eyes, so that the beast is rendered unconscious, but its heart continues to beat.

While regularly used in the slaughter of animals in Europe, Mfarej says that his Lebanese butcher was initially unfamiliar with the device. He also assures the animal can feel nothing after it has been shot.

Once the animal is unconscious, the butcher slits its throat, killing it in the more locally conventional manner and ensuring that Mfarej organic meat products are halal.

Once butchered, the carcass is aged for several days, allowing, Mfarej says, the collagen in the tissue to melt and thus the meat to become even more tender.

Although certain consumers may find such detailed accounts of meat production distasteful, there is a small but growing sector of the Lebanese market keen to heighten their awareness of exactly what they are ingesting and where it comes from. It is to this cohort that Mfarej?s meat will prove a welcome addition.

For now the demand is small; Mfarej?s stock of 20 animals is enough to satisfy it at present. But at the Al Marej Organic Food Store in Ashrafieh, Abbas is determined to educate customers as much as possible about what they are purchasing.

In addition to the meat being fully traceable, she lets customers know the breed of cattle they are buying ? Mfarej stocks charlois, black angus and brown mountain, among others ? and the part of the animal particular cuts of meat come from.

Predictably, organic meat, taking longer to raise and produced on a smaller scale, is more expensive than other locally grown meat. Abbas says the price is approximately halfway between good baladi (farm-produced local produce) beef and high-quality imported beef. Depending on the cut, she estimates the cost at between $20 and $35 per kilo.

Mfarej hopes to diversify his production in the future, expanding to include organic lamb and goat meat.

And although for the moment, Mfarej can only guarantee his cattle spend at least three-quarters of their lives living organically, Abbas hopes that the day arrive when calves are bred on the Lebanese farm, ensuring 100 percent organic production from conception to slaughter.

And ultimately, maybe the time will come when instead of fleetingly thinking ?poor creatures,? informed consumers will unflinchingly select their meat based on their knowledge of exactly where it came from. 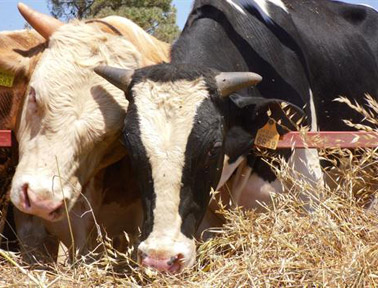