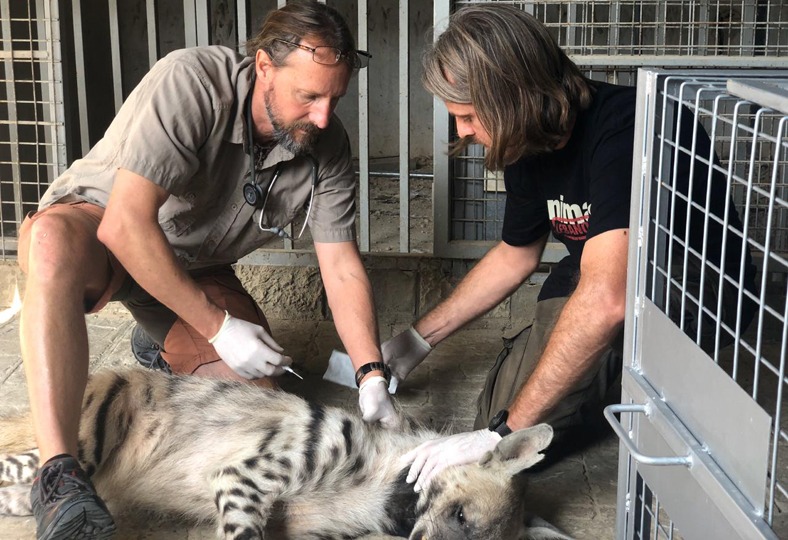 Nationwide protests have rocked Lebanon for 15 days. All schools, government offices, and banks completely shut. The Prime Minister has resigned and the Council of Ministers has collapsed. We have been working on two hyenas that were illegally captured from the wild. Now their situation has become even more desperate.

The entire mission was at risk, and the longer they stayed the more they would suffer and less chance of a successful reintroduction… Striped hyenas are Lebanon’s national animal and their survival is under threat. These two had been caught with snares and moved to a zoo.

Animals Lebanon rescheduled their rescue mission three times due to safety risks. What should have taken only a few hours turned into a ten as we navigated roadblocks and protests to rescue and release two striped hyenas.

DONATE NOW TO HELP US RESCUE OTHER ENDANGERED ANIMALS

Both hyenas were kept in a small cement room in poor conditions for the last six months. Dirty footprint markings on the walls show where they stressfully paced and searched for a way out.

A wildlife vet was flown in to sedate them and give them a health check. They were quickly moved into a transport crate and began the long drive to through backroads to avoid roadblocks. We named them Freedom and Unity because of the protests and the extra challenges we had to overcome.

They were taken to the Shouf Biosphere Reserve. Their natural habitat and the largest protected area in Lebanon. The door was opened and for the first time in six months Freedom and Unity ran out together to restart their life.

Thank you to the Shouf Biosphere Reserve, Dr. Ian Sayers, and everyone else who make this rescue possible. The situation is desperate – We need your help now to rescue other endangered animals trapped in terrible conditions before it becomes too late.

We need your help now.