Nora's fate tells the story of striped hyenas in Lebanon One of our supporters contacted us urgently after seeing a hyena on television that someone had caught - telling us that the animal looked terrified and appeared to be in severe pain. We got in touch with the television station to introduce the work of Animals Lebanon. Fortunately they appreciated the need for speedy action and helped us contact the person who had featured in their program. We discovered that five days earlier he had seen the injured hyena crossing the road, caught her with a rope and taken her to his house.

We sent our team to the location and explained that we needed to take the hyena for treatment, rushing the animal to a veterinarian where x-rays revealed the extent of her injuries. We were shocked to find that her body was riddled with shot gun pellets. The hyena had an open wound on her lower thigh and a badly broken leg. Immediate surgery was needed to clean her infected wound and a further operation was planned to fix her leg.

People are now familiar with the other hyenas Animals Lebanon has rescued in the past. For many their image of hyenas comes from a television wildlife documentary showing a bunch of scruffy, dog-like animals tearing at a carcass. So why do we need to protect these creatures and what is their role in our ecosystem?

Our Lebanese wildlife is gradually disappearing: over the last hundred years at least ten Lebanese mammals have become extinct. The combination of the destruction of habitat and unregulated hunting means hyenas are at risk of becoming extinct in Lebanon. It is vital that we act now to save those hyenas at risk before they disappear from our countryside like so many other animals.

It was extremely sad to see this beautiful animal lying on her side, barely able to breathe and covered in blood, shivering and hoping her nightmare was over. We called her Nora. Shortly before this story was posted Nora sadly died of her injuries, but it does not have to end there. We need to use this sad case to highlight the plight of the striped hyena in Lebanon and help give this species hope for survival.

Where does such cruelty end? Animals Lebanon has launched the campaign to enact national animal protection and welfare legislation, and we are now working with all of our resources to make sure this draft law is enacted. No longer will these animals be allowed to be captured for use in zoo, private collections or pet shops.

The draft law provides for substantial penalties, including fines and imprisonment, but also encourages education and awareness to help prevent such abusive and destructive acts from happening at all.

Donate today to help animals like Nora, or click here to join us in our campaign to enact animal protection and welfare laws. 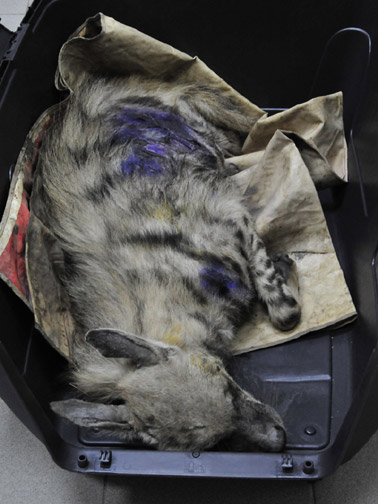 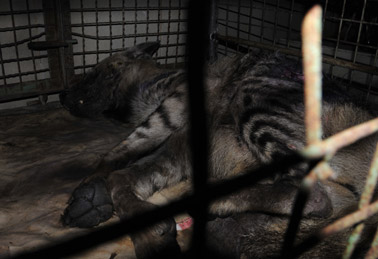