Abandoned in a plastic bag

Yasmina, Serena and Karim are three kittens named after their rescuers.

On Friday evening we got an sms message to the Animals Lebanon mobile phone stating that there were some kittens abandoned in a yellow plastic bag next to LAU 's parking.

Our volunteers rushed to the scene to rescue them and but the kittens had disappeared. As we searched the area, we got another call from some students who had found three next to the AUB area.

We arrived to the AUB medical gate to find one of the cutest rescues we have ever encountered. The three students, Yasmina , Serena and Karim were each holding a kitten in a shoe box. At first we thought these were different kittens to the ones reported to us earlier. However as we spoke to the students they explained that the kittens were found in a yellow bag.

Such a coincidence suggests these kittens were really meant to be rescued. They are now being bottle fed and soon will be ready for adoption. Help us spread the word so even more can be saved.

We applaud Serena, Yasmina and Karim for their compassion and we hope that more people follow their lead. 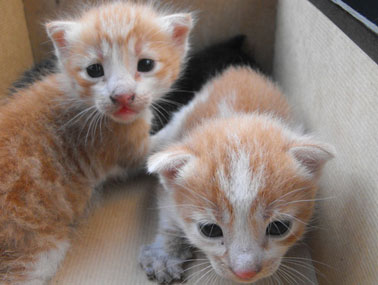 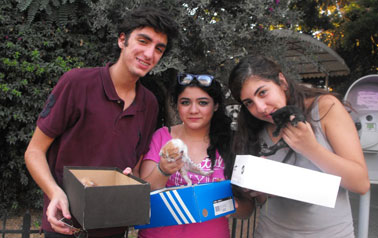